skip to main | skip to sidebar

Inspired by @cbloodworth 's blog post "12 Ways I Hope to Use Twitter in My Spanish Classes this Year", I thought I'd post a few of my favorite uses of Twitter in my Spanish classes over the past year.


First of all, in case this isn't obvious to everyone, I have my Twitter account in Spanish so that whenever I show tweets to my students they are immersed in the likes of "¿Qué está pasando?" and "hace 22 minutos".

I also set my Trending Topics to "México". As you can see from the screenshot below, there's currently not much of interest. (Well, maybe there would be if I could figure out what the heck #iconospotosinos was all about or if my students followed soccer (Carlos Salcido) but we're in the Philippines and we like basketball.) Occasionally, though, I find some real gems. 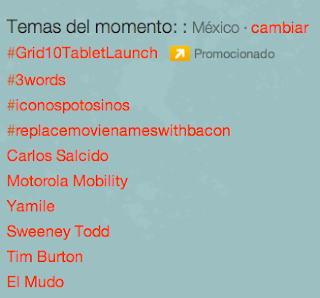 The most valuable use of Twitter for me is the ability to tap into the absolutely authentic and current conversation that is going on among Spanish speakers. Students with limited language ability get to experience the diversity of ideas and perspectives across the Spanish speaking world. Because tweets are limited in length, I've found that my students are more willing to struggle to figure out the sentiments of the twitterer that if they were reading a series of articles or even blog posts.


#FuerzaMineros Twitter Lesson
One of the biggest news stories last year was that of the Chilean miners who were trapped for 69 days. I used Twitter in my classroom to follow the trapped Chilean miners story and the outpouring of support from across Latin America. As an aside, it looks like a year later the miners aren't doing so well. It could be interesting to revisit those tweets and contrast them with their current situation. One of the core themes of IB Spanish is media and I can see a lot of potential for discussion on that theme with this topic.

#Diadelosmuertos and #Lutoxmexico Twitter Lesson
Last October I was searching for tweets to show my students on Día de los Muertos and discovered that Mexicans were more preoccupied by the death of 14 teenagers in Juárez at the hands of drug traffickers than with the death of their grandparents. I created this slideshow with the tweets that I compiled by searching #juarez and #lutoxmexico.

#Bicentenario Twitter Lesson
My students analyzed tweets with the hashtag #Bicentenario to understanding the controversy over celebrating Mexico's Bicentennial in the midst of a drug war. The level of analysis can vary depending on the level of your students. For some of my classes, the ability to determine if the twitterer's viewpoint was ¿positivo o negativo? was enough. The assignment was for students to write a blog entry that incorporated tweets as well as other web 2.0 elements.

Alejandro Sanz and Honduras Twitter Lesson
Here is a PPT of some tweets and tweetpics from the Spanish singer @AlejandroSanz when he visited Honduras for a concert. I used this when I taught the bilingual song "Looking for Paradise" to talk a little bit about a country that rarely gets the spotlight.

Grammar Twitter Lessons
In addition to the above uses of Twitter that focus on current events, I've also found great Twitter trends and hashtags that allow students to read, practice and use different grammatical structures (and usually get a chuckle out of it at the same time).

#Cuandoerachico - Joining Twitter trend to practice imperfect tense.
#SiLennonFueraMexicano PPT - I have a student who is a big Beatles fan and when I saw this trending topic, I knew I had to use it in class. There are frequently variations on the same theme like #siharrypotterfueramexicano that give students the opportunity to practice the conditional tense and sometimes give some insight on the target culture, although you do have to be careful of reinforcing stereotypes with some of the tweets.

Lastly, several of my students are Korean and they thoroughly enjoyed seeing Koreans wishing the Twitterverse "¡Felíz Chuseok desde Madríd!".  (Chuseok is Korean Thanksgiving/harvest feast.) I can't find my collection of those tweets, though. Oops.

For the 2011-2012 school year I am excited to try out some of the really cool Twiccionario worksheets at  @ZJonesSpanish's Zambombazo and I will be keeping an eye on the Spanish-speaking twitterverse for new opportunities to bring the Spanish-speaking world's ongoing conversation into my classroom.

Jajaja - I guess I spoke too soon above about there being no worthwhile Mexican trending topics right at this moment :-)

Hola! This is a blog where I hope to promote conversation about strategies, resources, ideas, and philosophies around the topic of teaching foreign languages.

Currently I am teaching high school Spanish and Geography to mostly Filipino and Korean students at an international school in Asia .